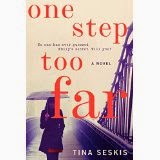 One Step Too Far by Tina Seskis (William Morrow, January 2015)

In this first novel, Tina Seskis takes her main character, Emily Coleman, now Cat, on a journey that many of us imagine but few ever take.  Emily has left her husband, her family and home behind to start her life over.  The now former attorney rents a room in a London flop house and starts a new job at a London advertising agency where her rise to the top is swift, but on the edge.  With her new friend Angel, Cat manages to keep one step ahead of anyone looking for her, erasing all traces of her past, except for her memories: memories of growing up as a twin in a dysfunctional household and memories of how she thought she had escaped her life growing up when she married her husband.  What Emily cannot escape is the memory of the events that have led to her running away and if she is not careful, it will catch up with her as her present collides with her past and things that Emily thought she had under control spin so far out of control that she may never be able to recover and regain a life that is her own.  Flashbacks are told in the third person while Emily’s present life is related in first person, a very effective technique as readers watch her spiral out of control still held fast by her past.  Emily/Cat is a tough character to get to know as she reveals very little about her present self.  Readers will come up with many variations on what might have caused Emily’s break with her life but few will see the twist that comes.  A little too much detail is given after the big reveal slowing down the pace of the story a bit but wrapping up any loose ends and questions that were remaining.
at 11:58 AM