The Gospel of Anarchy by Justin Taylor (Harper Perennial, February 2011)


David is as landlocked in his current job as a telemarketer as is Gainesville, Florida. He is a college dropout and spends his spare time sifting through the porn of a fledging 1999 Internet. It is summer, Florida is hot and David is listless, making him susceptible to a new kind of life. Fishgut is a dilapidated house where a group of unlikely roommates live, social dropouts, anarchists and generally lost souls, creating a religious cult of sorts, waiting for a new Messiah, in the form of a hobo, who will save this motley group from the world, each other and themselves.

A dark and visceral novel, The Gospel of Anarchy explores the overdevelopment of a university town, the isolationism the world of computers, and the exploding internet, can encourage, corporate and government corruption and oppression and the zealousness of anarchists as they search for something, anything to believe in, to hold on to. As distasteful as David found his sterile cubicle, he finds he can thrive, or at least think, amidst his new friends dirt and garbage, until he is able to immerge refresh and renewed. This first novel will not grab everyone, but you will find yourself considering it from time to time and thinking about some of the contradictions and dichotomies Justin Taylor explores.
at 12:58 PM No comments:


Sara thought it was important to know who her birth parents were, especially for her daughter and their medical histories and begins a search for the woman who gave birth to her, a search that reveals a terrible secret about her birth father, plunging her and her family into a downward spiral more horrible than her worse dream. Sara learns her birth was the result of a rape, her mother the only survivor of a campground serial killer who has never been caught. A leak catapults Sara’s story to the forefront and she is contacted by her father, John who begins a slow cat and mouse game with her, telling her he needs contact with her to stay calm…so he won’t kill again. FBI agents want to catch the campground killer and now have the perfect bait: Sara. Wanting to do the right thing, and not wanting any more blood on her hands than she feels she already has, Sara agrees and is drawn deeper and deeper into a web of deceit and terror, not knowing who she can trust and who will keep her safe. Just when she thinks it is over, there is one last piece that no one will guess or see coming, keeping the suspense and tension high until the very end. This is a psychological thriller of the finest kind. The pace is rapid and taut, keeping readers on the edge until the very end.
at 3:13 PM No comments: 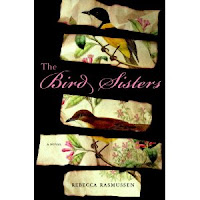 The Bird Sisters by Rebecca Rasmussen (Crown, April 2011)
Milly and Twiss are spinsters living a quiet life in rural Wisconsin. When a bird enters their house, they know they will receive visitors. A visit from an injured goldfinch brings a minivan with a mother and her children, a careless, thoughtless comment from Milly, and the dredging up of a sad story from another time that Milly remembers every day, yet hasn’t though about in years. Remembering the summer her elder cousin Bret spent with the sisters and their parents, Milly recalls her father, a man with dreams of the good life and a natural aptitude for golf, her mother, from a well-to-do family, trying to make the best life she can for her family, quietly putting up with her husband’s failed dreams. She retells the events that occurred that summer and decisions she made to try and hold her family together, events and decisions that will shape the rest of her life.

The Bird Sisters, a first novel, has an ethereal quality to it, alternating between the present and Milly and Twiss wonder through their lives, and the past, where adult decisions were made by children who would have to live with their decisions, and their effects on others, as adults. Rasmussen’s language is beautiful, her metaphors subtle, creating the private world of Milly and Twiss, inviting the reader in, but never allowing them to get too close.
at 3:10 PM No comments:
Newer Posts Older Posts Home