The Killer Next Door by Alex Marwood (Penguin Books, October 28, 2014)

23 Beulah Grove, a run-down, cash only apartment building in South London is most decidedly not a place where everyone knows your name.  In fact, it is just the opposite: if you know what someone calls themselves, you can be pretty sure that isn’t what their real name is.  Body parts and smelly drains backed up with who knows what are par for the course for this flop house.  Many feel as if they are being watched, and they probably are, be the closed circuit cameras the smarmy, grossly obese landlord, but worse of all, Collette, who is on the run from her former boss who she saw kill someone, finds evidence that the previous tenant of her apartment was murdered…or at least dismembered…and becomes fearful she may be next, fairly certain the murderer is a fellow border.  One summer evening, a terrible incident leaves the residents with no choice but to form a most unholy alliance: if one of their secrets is revealed, they will all be revealed, unraveled.  Tight plotting, constant action and well-dawn, real characters, even with all their odd proclivities, propel Edgar Award winning Marwood’s sophomore offering to a chilling climax that very few will have seen coming.  A perfect read to stay up late at night with, especially during the seasons of goblins and ghostly things.
at 9:53 AM No comments:

In this collection of short stories that are fleeting, or rather the characters and their relationships are fleeting, Taylor examines the familial bonds, friendships and acquaintances that make up our human experience but that are often just out of our grasp, the effects not felt for perhaps years later.  At the same time, the collection feels as if Taylor is having a private joke with himself, perhaps at the characters’ expense, maybe even at ours, yet with each story there is something hidden, something that makes us want to stand up and redeem ourselves. Taylor has an uncanny knack of inserting sentences or phrases that seem innocent (in “Carol, Alone” the narrator talks about drinking real coffee versus decaf, musing that people chalk up their need to drink decaf to “Bad hearts…”) but at the same time, leaving the reader wondering if the phrase might have a deeper meaning and have been carefully chosen and placed rather than being as innocuous as they did at first blush.  Taylor’s writing has agelessness about it and is easy and genuine whether he is writing about high school students, college students, children or retirees.  Read individually, these stories and characters give the reader pause, but when collected and read as a whole, they linger long past the covers of the book.
at 9:24 AM No comments:

After the death of their mother, fifteen year old Sam McAlister and her ten year old sister Ollie move from Eugene, Oregon to a rural farm where their father, known as Bear, lives in a teepee in the meadow where he raises bees and sleeps under the stars.  Sam is used to spending summers with her father, but Ollie never did.  Ollie has not spoken since the death of their mother, something that happened after their aunt died several years earlier; unknown to Sam, Ollie sees what she calls Shimmering, the spirits of those who have died, and not understanding what she sees often frightens the young girl.  Shortly after the two arrive in Bear’s meadow, the body of a young woman washes up on the shore.  Bear becomes an immediate suspect, but Sam knows in her heart he wouldn’t hurt anyone intentionally, and Ollie knows from the Shimmering that something evil is out there, closer than the sisters know, an evil that has been lurking and festering for many years, an evil that can destroy the McAlisters if left unchecked.  Told in distinctive alternating voices, Sam and Ollie tell their stories, the story of their past, the story of their present and hint at the possibility of their futures as Sam is on the verge of being a young woman and Ollie on the verge of being a teenager and all the changes that comes with that.  The Shimmering that follows Ollie is used effectively and takes the “ghost story” to a new level as the psychological tension stays high in this fast paced narrative that will also allow readers hearts’ to ache for these two young girls who are, at the same time, more lost than they realize and not nearly as lost as others see them.  Crooked River is a strong debut that combines strong characters coming of age, a murder and a touch of other worldliness with a natural setting into a taut thriller.
at 9:19 AM No comments: 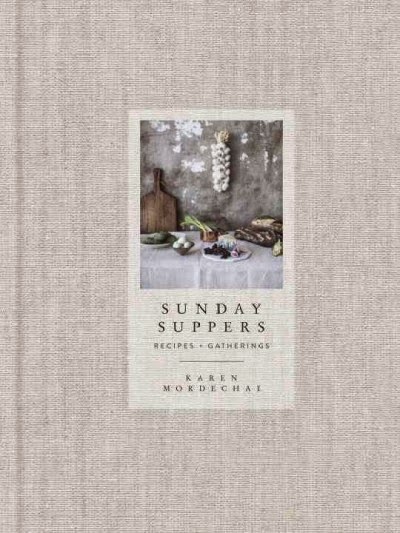 In the spring of 2009, a group of friends and neighbors began gathering in a loft in Brooklyn to create and share a meal communally, a tradition that evolved into a communal cooking center and food website encouraging the sharing of cooking and dining together as a community: Sunday Suppers was created.  With an emphasis on farm-fresh, local ingredients, the recipes are often tried and true with a little bit of a surprise, watermelon salad with lemon and coriander seed dressing, for example, but all are accessible. The recipes are gathered by the time of day (Morning, Noon, Afternoon and Evening) and then subdivided into special events, [Morning] In Bed, a noontime Spring Forager’s Lunch, and Afternoon Taqueria and an Autumn Dinner for Evening.  Easy to read and follow recipes, with relatively easy to locate ingredients make these meals as easy to create as they are special.  Karen Mordechai, a photography rand stylist has help to create a beautiful book that is as beautiful, with plenty of white area on the pages and lovely photos of not only the finished dishes, but the preparation make the book a pleasure to look at as well, as it is useful and inspirational.  Cook’s notes help with sourcing some of the harder to find ingredients and explain the trickier techniques; each occasion begins with a testimonial as to why each meal should be created and shared and what made it special for the person.  Even though Sunday Suppers is Brooklyn based, the book and the recipes have a laid back, relaxed feel to them, much like a lazy Sunday morning, afternoon or evening.


FTC Disclaimer: I received this book from the Blogging for Books program in exchange for this review.
at 8:57 AM No comments:

Growing up in a Roman household with an academic father, a distant mother and a prettier, older sister, no one could have guessed that Elsa Schiaparelli would become a taste maker as one of the most innovative fashion designers of the early twentieth century and that her styles would be embraced especially by American women, forever changing the way they dress.  Biographer Meryle Secrest has taken the life of this woman, whose name admittedly is not as commonly known today as Chanel, and has examined and explored the many facets that inspired and drove Schiaparelli.  After making a bad marriage to a cad and a fraud, Schiaparelli found herself deported from Britain and living in Greenwich Village essentially as a single mother with a seriously ill young daughter (Gogo contracted polio at a young age).  With a lot of moxy and daring (“Dare to be different” became one of the quips she was known for) Schiaparelli began accessorizing---hats (that looked like shoes or were inspired by lamp chops), purses and gloves, and then turned to the practicalities of the time and women: dresses that wrapped on rather than went over an elaborate hairdo, and unexpected fabrics and textiles in unexpected places (otters are good swimmers so why wouldn’t their fur make an exceptional bathing suit?) and practicality, split skirts turned into wide-legged long trousers.  She was inspired to be as daring as Dali who painted a dress design for her, a dress that was instantly snapped up by the Duchess of Windsor as a honeymoon gown.  Schiaparelli’s personal life was not nearly as elegant or glamorous as her public life, rarely seeing her daughter, though all the time attending to Gogo’s corporal needs.  Schiaparelli was also under suspicion as a spy as the United States neared and entered World War II; her returned to Paris was marred by this dark cloud, but Schiaparelli was not kept down and continued to forge ahead.  This well researched, well documented biography is a must read for anyone with an interest in the popular culture or haute couture of the early twentieth century.  Elsa Schiaparelli is a fascinating woman about whom many more should know much more.
FTC Disclaimer: I received this book from the Blogging for Books program in exchange for this review.