Orange Prize winner Andrea Levy has drawn a picture of Jamaica just before and after the slave rebellion of 1832. Told from the point of view of July, a woman born into slavery on the Amity sugar plantation, the story traces the history of one plantation through July’s eyes as she writes her memoirs, and through her son’s editorial comments as he prepares to publish her work. When July is a young girl, the widowed sister of the plantation owner, Mrs. Caroline Mortimer, takes a fancy to July and brings her to live in the big house, changing her name to Marguerite, and teaching her to read, write and to help run the household and plantation. July manages to work this situation to her advantage, and develops a serene sense of humor about the entire situation. After the rebellion and the death of Mrs. Mortimer’s brother, however, a new overseer arrives at the plantation and decides that everything on the plantation, including July, even though she should be free to leave, is there for his taking and to use as he sees fit. July is a survivor, though, and comes through her life with grace and humor and raises her children to be successful, responsible members of a greater society. Told with a voice as lilting as the warm Jamaican breeze, Levy has a keen ear for dialect. July is an admirable heroine, not allowing herself to become a victim of circumstances; she learns to get the best for herself from each situation.
at 10:22 AM 2 comments:

...Library Aimee, who won the copy of Backseat Saints! Thank you to all those who commented on "Just Jennifer."
at 10:10 AM No comments:

The results are in! The overwhelming favorite summer reading spot is...
............ on the beach!
Here are the full results:

The Faculty Club by Danny Tobey (Atria Books, June 1, 2010)
Jeremy Davis has left his small hometown to attend law school at a prestigious school.  Here he is tapped by a revered professor as a faculty assistant, and soon realizes that he is being considered for an exclusive society, along with three of his new One-L friends.  The four soon realize that only three of them will be inducted into the society and begin to form alliances trying to outwit and outlast the others.  Jeremy, at first, assures himself this society is not a big deal, but when promises of success and riches beyond his wildest dreams are made, he finds himself doing things he could have never imagined he would do and not liking himself very much.  The more Jeremy learns about V&D, the more he realizes there is something evil about the society and turns to his true friends to uncover the truth about this society and save the friends he might have made.  While the secret to the society is a little outside of reality, the fabulous academic setting and an intelligent plot, codes to solve, hidden tunnels to follow and a cast of mysterious, eccentric figures make this worth taking a chance on this first time author.
at 11:11 AM 3 comments:

...Miss Lucy, who won the copy of The Queen of Palmyra! Thank you to all those who commented on "Just Jennifer."
at 8:31 PM No comments:

Backseat Saints by Joshilyn Jackson (Grand Central Publishing, June 8, 2010)
After a chance, or not so chance, meeting of a fortune teller at an airport, warning Ro Grandee it’s either her or her husband, Ro tries to shoot her husband, missing him and injuring the dog she loves more than life.  This gypsy’s warning takes Ro Grandee, once Rose Mae Lolley, on the trip of a lifetime, searching for a mother who abandoned her as a young girl, but who has been keeping track of her all these years, and watching over her, like the saints that Rose Mae so often summons.  Backseat Saints tells the story of Rose Mae Lolley and Ro Grandee as Rose Mae Lolley escapes from her abusive father and Fruition, , turns to the arms of another abusive man, Thom Grandee, after her high school boyfriend vanishes, and how she finds her freedom.   The spousal abuse Thom inflicts on Ro is often difficult to bear, but Ro is strong, and eventually finds a way back to herself with the help of a guardian saint she never knew she had.
at 10:46 AM 2 comments:

...Fernanda L., who won the copy of Anthropology of an American Girl ! Thank you to all those who commented on "Just Jennifer."
at 10:40 AM No comments:

The Queen of by Minrose Gwin (Harper Perennial, April 27, 2010)
in 1963 is, like most Southern towns of this time, a segregated town and eleven-year-old Florence Forrest is trying to make sense of all she sees around her.  Her father, after a series of unsuccessful jobs, is selling burial insurance, and is very active in community groups, something of which is very proud, though she doesn’t realize most of his activism is as a member of the Klan.  ’s mother Martha realizes she did not choose wisely when she married and has struggled to make ends meet, baking cakes to sell to the local ladies, and spending her nights visiting a moonshine operation to get her through life.  Martha’s mother Mimi is well-to-do and thinks she treats her black maid, Zenie (named for Zenobia, the queen of ancient Palmyra) very well, paying her $10 a week (rounded up from $9.75) and offering Zenie her cast-off hats.  When Zenie’s niece Eva Greene arrives for the summer in Millwood to sell burial insurance, raising her last year’s tuition for college, a series of events is triggered off that changes Florence’s life, even though she can’t understand what has happened, until many years later when she is able to make her own choices and choose her own fate.  A wonderful first novel that depicts the American South at a pivotal time in history and the effects it has on a young girl at a pivotal time in her life
at 11:43 AM 5 comments:

...LateNightReader, who won the copy of Girl in Translation! Thank you to all those who commented on "Just Jennifer."
at 11:30 AM No comments:

Where is your favorite spot to read? 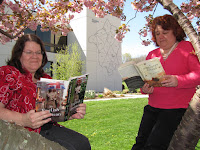 Do you have a favorite nook
where you go to read a book?
Would you read one in a tree?
Let us know where you will be…

By now, most of you have probably seen Jennifer and me reading in a tree... Send in a picture of yourself reading in your favorite summer spot. (If you're camera-shy, then just send in a picture of the spot.) I've also posted a poll on the topic. Look on the right side of the blog.
at 4:03 PM No comments:

Anthropology of an American Girl by Hilary Thayer Hamann (Spiegel & Grau, May 25, 2010)
A first novel, Anthropology of an American Girl was originally self-published in 2003.  The novel begins in the fall of 1979, Eveline and Kate’s senior year in a and details the next five years, focusing on the narrator, Eveline, as the girls finish high school, and then follows Eveline to NYU and a new life in .  As the story begins, Kate’s mother has just died and she now must re-imagine her life without her parents.  Eveline also feels the loss of Madame but now feels responsible to shepherd Kate through the next part of her life.  Eveline is a careful, meticulous observer who many times detaches herself from a situation in an attempt to make sense of what is going on, yet underneath there is a certain fragility to her, and she often allows events to happen to her rather than taking control of things.  A study of a young woman coming of age, Anthropology of an American Girl, while very detailed, is compulsively readable.
at 10:08 AM 4 comments:

I was immediately drawn into the story by the young narrator, Kimberly, and was taken by her observations that the life her aunt Paula had set up for her and her mother was nothing to be grateful for. Kimberly quickly learns how to navigate her new life, in spite of the language barrier and becomes very resourceful and is constantly amazed at the generosity of her new friends and their willingness to help. Kimberly is ashamed of the conditions under which she and her mother live, but realizes that to her true friends this makes no difference, and here again they are willing to help. As Kimberly ages and encounters more obstacles, such as her new principal accusing her of cheating on exams when she does so well, she never waivers and her voice stays true. For most of the book, Kimberly is selfless in many ways, while still doing the best she can in school for she knows this is the best way out of their situation for her mother and herself. A decision at the end of the book continues the theme of her self-reliance, and though it may bother readers at first, they soon realize that the decision was bittersweet for Kimberly and she did so out of love for many different people. A fresh new voice, Kwok deftly combines a coming of age story with an immigrant family’s tale; the result is a beautifully satisfying novel. This is Kwok’s first novel.
at 3:42 PM 3 comments:

Welcome to a new feature on our Adult Summer Reading Club blog. Every month I receive some Advanced Reader Copies of titles from publishers in the hopes that I will select these titles for the Hunterdon County Library collection. I read as many as I can, and love to talk about new, upcoming titles. I will generally blog only on titles that I have enjoyed, as I like this to be a positive experience; I know everyone has different tastes in leisure reading and I don’t want to dissuade anyone from choosing a book just because I didn’t care for it. First time authors are a favorite of mine, so you will see many titles by first time novelists in this blog. I encourage your comments, as they will enhance the community feeling of our club, as well as indicate you’re reading my column.  Feel free to use your established club alias; we'll know who you are. Enjoy the blog and happy summer reading!