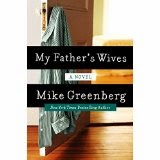 Jonathan Sweetwater appears to have it all: a career he loves that provides him with more than enough money to live comfortably in Connecticut, a son and daughter who are, to his mind, perfect and a beautiful wife, Claire, with whom he feels he has a mature, adult relationship based on love and mutual trust.  The only thing that is missing from Jon’s life was a relationship with his father both when he was a child and as an adult and now that Percy Sweetwater is dead, there is no hope of every reconnecting with the man who left his life with Jon was nine years old.  Percy became a serial husband, marrying five more women after Jon’s mother who seemed to take Percy in stride and did the best she could to raise the man she did.  Jon comes home from work one day and finds a man and woman in his guest bedroom (the one with the good sheets); he cannot see their faces but fears that the woman is his Claire.  His world shaken, Jonathan decides that he must learn more about his father in order to understand more about himself and possibly his marriage and sets out to find his father’s ex-wives to see if he can figure things out.  During this journey and Jon’s travels, he learns things about his employer, who he thought he knew and with whom he thought he had a more than cordial relationship, and most importantly, he learns about himself and what he learns will make him a better father, husband and man.
at 12:03 PM