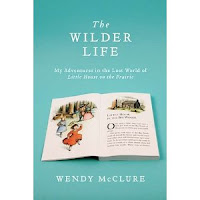 The Wilder Life: My Adventures in the Lost World of Little House on the Prairie  by Wendy McClure (Riverhead, April 2011)


Generations of little girls have grown up with Laura Ingalls Wilder; first with the books than during the seventies and eighties with the television show, but where does the myth end and reality begin? Wendy McClure becomes re-obsessed with one of her favorite childhood books Little House on the Prairie and sets out on a quest to find the real world of Laura, or the real world as she perceives it, and along the way finds that the Laura she thought she knew did not have the carefree, everything will work out life as portrayed in the books and later the television series. McClure learns that the producer of the television show had filed a lawsuit against the museum where the original Kansas homestead to stop them from using the name Little House on the Prairie---uh, isn’t that what it is? McClure also learns of the various prejudices the Ingalls had, especially toward the Native American Indians, and she finds evidence that Pa skipped out of Iowa once to avoid paying rent. In addition to visiting as many of the preserved sights as she was able to, McClure churns butter, makes vanity cakes and spends the night on a farm where she encounters a group of survivalists hoping to learn skills that will see them through the end of the world. McClure also reads many of the more scholarly works written about Laura Ingalls Wilder as well as the manuscript of Pioneer Girl an unpublished memoir among Rose Wilder Lane’s papers at the Herbert Hoover Library. More than just the story of trying to recreate Half-Pint’s adventures, The Wilder Life explores the concept of memoir as fiction and the social mores and conditions of an earlier time. Told with hope, wit, wisdom and even a big of self-deprecation, this book is an adventure that anyone who spent time in Walnut Grove or DeSmet will not want to miss.
at 10:07 AM No comments: 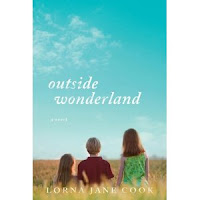 
Librarian and Readers’ Advisor extraordinaire Nancy Perl (author of the Book Lust series) recommends you give a book a fifty-page chance before giving up on it, which is exactly what I intended to do with Outside Wonderland. Several hours later, I was still reading. Outside Wonderland is the story of three siblings, Alice, Griffin and Dinah (all named after characters from Alice in Wonderland), whose mother died when they were seven, four and one, and whose father died six years later while they were in Greece. Raised by their grandmother Joan, the trio has issues, individually and as a group, but in spite of having very few redeeming qualities, there is something about this trio that makes you keep rooting for them. The plotting is often predictable: Alice is an actress who has taken many casual lovers over the years and now may have found Mr. Right… and his son; Griffin and his partner Theo are at odds over trying to adopt a child that Theo desperately wants and Griffin is uncertain about when Dinah shows up pregnant from an uncharacteristic fling she had while on a cruise.

Watching over them in a Greek Chorus sort of way are their parents from Here, commenting on their children’s lives and trying to give them a push in the right direction. These scenes are a bit precious, but they do give more background and another perspective at times.

Do not be tempted to read ahead. The first sentence of the epilogue may well be the best sentence of the book as it startles, saddens and then relieves all at once, but it will be a spoiler if read too early. This book will not hold everyone’s interest, but give it fifty pages and you might just be surprised to find yourself unexpectedly down the rabbit hole as well.
at 10:04 AM No comments:


In a fictionalized memoir, author Goldman details his meeting, courtship and marriage to the much younger author Aura Estrada. In spite of their age differences, the two had were kindred spirits and had a successful marriage. Just before their second anniversary, Aura is killed in a surfing accident while in Mexico and Goldman must rebuild his life without the woman whom he had grown to love so fiercely in such a short period of time, with such passion he often feels he will never heal. Told in the form of a novel to protect the couple’s friends and family, and to preserve some of the intimacy the couple shared, you will quickly forget that you are not reading the biography of a great love story. Goldman’s language is beautiful, story told with an elegant gentleness, that slowly reveals a poignant and heartbreaking tale.
at 10:02 AM No comments:


While Troy Chance is returning to Lake Placid on a Lake Champlain ferry she sees a bundle being thrown in the frigid lake from a ferry going in the opposite direction. Almost instinctively she realizes the bundle is a child and she dives in after it even though she is not a strong swimmer. She rescues a little boy of about five or six years old from the frigid water and finds herself fiercely attached to the boy and determined to allow no further harm to come to him. As a freelance writer she is able to make a trip to Canada where she finds the boy’s father, a wealthy businessman. Satisfied that Philippe had nothing to do with Paul’s abduction, Troy brings Paul back to his father’s house; his father has moved during the time that Paul and his mother were abducted (his mother is presumed dead) and asks Troy to stay and help Paul get acclimated to his new home as he seems as attached to Troy as she is to him. The longer Troy stays with Philippe and Paul, the more attached she grows to both of them and the deeper she gets into the mystery of what happened to Paul and his mother; before long she finds herself chasing kidnappers and murderers back to Vermont, all the while missing what is write before her. Though the plot is interesting, the pacing is a little slow and the tension never quite builds, the story lacking the suspense it could have in a more seasoned writer’s hands.
at 12:39 PM No comments:


Thre is a fine line between dysfunctional and eccentric and the Steins are carefully balanced, taking turns dipping from one side to the other. When Louise has a heart attack, Buzzy calls their three children against her wishes and Anna, Portia and Emery, with boyfriend Alejandro in tow, descend on the Santa Barbara hospital room where they sort out their adult lives and reminisce, perhaps looking for answers, in their childhood. The scene shifts effortlessly between the present day, Anna unhappy in her marriage having many affairs, Portia’s marriage on the brink of divorce, and Emery and Alejandro deliriously happy, on the brink of fatherhood if one of the girls will donate their eggs to their progeny, and the trio’s childhood which was anything but traditional. Each character, the children especially, are drawn with a clarity that will allow you to see how each arrived at their current place in life and where they can go from there. Many difficult subjects are touched on, anorexia, sex addiction, homosexuality and drug and alcohol use, but each is handled with such aplomb that it seems perfectly natural for this family as they work their way through these issues. The writing is honest and poignant, unforgiving and tender creating an unforgettable family that you will never wish is your own, but that you will be glad to visit over and over.
at 9:50 AM No comments:
Newer Posts Older Posts Home