***Please note: these books, and many more, can be found in HCL’s downloadable collection https://hclibrary.overdrive.com/ 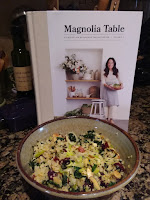 Magnolia Table: A Collection of Recipes for Gathering by Joanna Gaines
This second cookbook by HGTV host and founder of Magnolia Table and Silos Baking Co. (Texas) offers a new selection of recipes for fans, new and old.  Gaines covers the basics (for example: cracker crusts, homemade tortillas and noodles), offers suggestions for homemade spice mixes, before diving into Breakfast, Soups and Salads, Appetizers and Starters, Side Dishes (such as the Cauliflower “Couscous” ---grain free shown in picture), Dinner, and Desserts.  Each recipe that can be found at one of the restaurants Gaines (along with her husband Chip) founded is clearly marked.  Several recipes have anecdotes and tips, but readers who are not familiar with the Gaines’s success might welcome more backstory and anecdotal information.  The Gaines’s have a large family (four children) and are used to running a restaurant so many of the recipes make a lot; most are easy to scale, and many can be frozen for later use.  Clean and well-laid out, this book will be a favorite for home cooks, especially for her fan base. 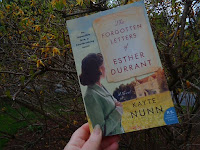 The Forgotten Letters of Esther Durrant by Kayte Nunn
Shortly after World War II and the death of her son, Esther Durrant sinks into a deep depression; her husband commits her to an isolated mental asylum on an island off the coast of England.  Under the care of Dr. Richard Creswell, Esther begins to slowly heal, and take comfort on her small island.  Almost seventy years later, the island, Little Embers, is all but deserted when Rachel Parker, a marine biologist is ship-wrecked on the island and finds hidden love letters on the island and is determined to find the person to whom the letters were written.  When she crosses paths with Eve who is in London helping her grandmother write her memoirs, irrevocable events are set into motion that will reveal long-kept, long-hidden secrets.  For fans of The Guernsey Literary and Potato Peel Pie Society and The Chilbury Ladies’ Choir. 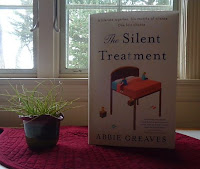 The Silent Treatment by Abbie Greaves
This assured debut begins with Maggie taking a handful of sleeping pills and her husband Frank, who is playing chess in the next room, finds her only when their smoke detector goes off.  As Maggie lies in the hospital, her life in the balance, Frank tries to find the words to tell her why he hasn’t spoken to her in six months: he is carrying a tremendous burden and hopes the telling of their story, the telling of the reason fo his silence, will bring his wife, the love of his life, back to him.  Greaves’s pacing is perfect in this exquisitely painful portrait of a marriage that is as heartbreaking as it is life affirming.