Lost Books and Old Bones by Paige Shelton
When Delaney Nichols left Kansas to work at The Cracked Spine in Edinburg, Scotland she never guessed she would fall in love with the country, with her new boss Edwin MacAlister, with her job, and with local pub owner Tom.  Delaney forges a friendship with some local medical students when they bring in a set of rare illustrated medical books, An Atlas of Illustrations of Clinical, Medical, Surgery, and Pathology to sell.  Sophie and Rena have been best friends forever and introduce Delaney to fellow student Mallory one night when they are out at a pub.  Delaney also meets Dr. Bryon Eban, a professor at the school, who Delaney suspects is having affairs with at least one of the young women if not more.  Eban is also obsessed with a 19th century professor at Edinburgh University, Robert Knox who bought the murder victims of William Burke and William Hare for his medical students to practice on.  Delaney finds a set of scalpels with the books that were brought in and wonders if there is a connection to Knox, but before she can research the provenance, Mallory is found murdered in the alley next to the bookstore and Delaney finds herself off and running on another murder investigation.  Complicating matters is Bridgit, a reporter who once dated Tom and is not above putting out damaging, if not outright lies, stories about Delaney.  Though Delaney is headstrong and independent and often takes the lead, almost pushing her friends aside, in her investigation which seems a little discombobulated at times and may not win new fans to this series, but the book history and the Scottish setting will hold the interest of readers who have read the first two mysteries in the series.

All the Beautiful Lies by Peter Swanson
Just before his college graduation, Harry Ackerson learns his father Bill has died after a fall from his usual cliff walk.  Harry heads for his father’s home in Kennewick, Maine where his 35-year-old stepmother Alice is waiting with arms more open than makes Harry comfortable: Alice goes back and forth between hovering and fussing over Harry and his loss and making sexual advances toward him.  Harry agrees to stay the summer and help out at his father’s bookstore until things are more settled.  Harry, already on edge, learns from the police that Bill may have been murdered and a mysterious young woman, Grace McGowan shows up at Bill’s funeral.  Grace says she casually knew Bill when he had his bookstore in Manhattan, and just happened to show up in Maine, but Harry thinks there’s more.  Chapters alternate between Harry working through Bill’s death and probable murder, and Alice’s teenage and young adult years until the two stories collide in a not entirely unexpected way.  The tension is often high, but there are a few too many loose ends and coincidences to keep this story as tight as it could be. 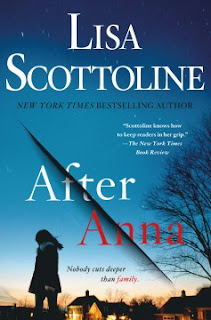 After Anna by Lisa Scottoline
Scottoline’s latest stand-alone tells the same story using two separate chronologies with mixed results.  Maggie Ippolitti has been estranged from her daughter Anna for sixteen years: Maggie was diagnosed with post-partum psychosis shortly after Anna’s birth and her husband Florian, divorced her, took full custody of Anna who he promptly placed in prestigious boarding schools, and never allowed Maggie to see her again.  Maggie has since recovered, and is remarried to widowed pediatric allergist Noah Alderman, and has a loving relationship with her step-son, ten-year-old Noah who suffers from apraxia.  Maggie is shocked and overjoyed when she gets a call from Anna who announces since her father has died (which Maggie knew), Anna would like to leave boarding school, and live with Maggie and her family finishing out her senior year in a suburban Philadelphia high school.  Barley consulting Noah, Maggie agrees, and in an almost euphoric state throws herself into giving Anna the ideal family life.  Anna too, seems to slide right into her new life and it all seems too good to be true: until it’s not.  Maggie finds some notes in Anna’s old textbooks that make her wonder if Anna is involved in a missing student from the boarding school.  The other narrative, told in reverse chronological order, begins with Noah awaiting the verdict after his trial for murdering Anna.  As Noah’s trial unfolds, readers learn of the tension between Anna and Noah, Anna accusing him of unwanted sexual advances, Noah being removed from his home, and Maggie immediately taking Anna’s side.  As Noah’s verdict is being read, Maggie is unraveling Anna’s story and the two collide in a rather rushed conclusion, leading to a too-good-to-be-true epilogue a year later, missing the healing that would have needed to occur to arrive at such a state.  Also not fully explained is why Maggie never sought out Anna once Maggie recovered, and especially once Florian died.  Nonetheless, fans of Scottoline will overlook these aspects and quickly turn the pages to find out what is really going on.

Paris by the Book by Laim Callanan
Leah and her husband Robert, a young adult author, both yearn for Paris---France, not Wisconsin where they live---but each through their own children’s book.  Leah is obsessed with the movie The Red Balloon, based on the book, while Robert prefers the Madeleine series by Ludwig Bemelmans.  Leah and their two daughters, Ellie and Daphne, are used to Robert’s disappearances while he writes and are certain he will return when as he leaves notes.  One day he disappears without a note and with no contact.  Leah finds tickets to Paris that Robert purchased; thinking that this is a romantic gesture meant to bring his family to Paris to find him, Leah and the girls set off, but they do not find him in Paris and though they don’t want to think he has left them, they can’t bear the thought that he is dead, either.  Before long, Leah and the girls find themselves part of Paris, Leah running a bookstore and dating a younger man, the girls attending school, and all of them becoming involved with the store’s owner, her son, and grandchildren.  A manuscript written by Robert shows up and Leah, using the manuscript, The Red Balloon, and Madeline as guides, searches for her husband, uncertain what she will do if she finds him.  This book will charm Francophiles and bibliophiles alike with plenty to discuss for book groups.